A large number of festivals are celebrated in the Madurai city of Tamil Nadu. Know about the major festival of Madurai.
Madurai : Madurai Culture : Madurai Festivals 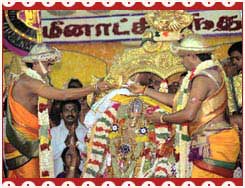 Madurai is famous for its spirit of festivity. There are a number of festivals celebrated in the city, forming an important part of its cultural heritage. People from across the globe gather here to be a part of these festivals. All the major festivals in the Madurai city of Tamil Nadu are celebrated with great pomp and show. The city is swept away by the tides of spirituality. In order to be blessed and to satisfy their desires, people celebrate the festivals with great enthusiasm. These festivals are an ideal time to remember the Lord and to seek his mercy. All the festivals celebrated in the city have a reason and a story behind them.

Pongal Festival
Pongal festival is popularly known as the Harvest Festival. The three-day festival is celebrated to thank the Sun, the nature and the cattle for giving the farmers a good harvest. Pongal is one of the major festivals of Madurai and is celebrated with great pomp and show. On the first day, known as Bogi, the houses are freshly painted and clutter is removed. The second day is the main day on which large-scale celebrations take place. Mango leaves are used for decoration. Sugarcanes and pongal (sweet rice) are the main culinary items. The third day is called Mattu Pongal and on this day, cattle are worshipped for bringing prosperity.

Jallikattu
Jallikattu is more of a sport than a festival and is held mostly in villages. It is a part of the Pongal celebrations. People in huge numbers throng the open grounds to witness the game of strength. The sport is basically a show of courage and valor expressed by the means of taming wild bulls.

Chithirai Festival
Chithirai Festival is celebrated on the Full Moon Day of the Tamil month of Chithirai i.e. in the month of April/May. The festival marks the wedding of Goddess Meenakshi to Lord Sundareswarer. A procession of a gold idol of Lord Azaghar, seated on a horse, is carried out by the devotees from Azaghar Koil to Madurai. This is done to take the Lord to Madurai for attending the wedding rituals. The festival stretches on for about 10 days and the participation of the devotees is unmatched.

Festival of the Cradle
During this festival, Goddess Meenakshi and Lord Sundarewarer are taken in a procession to a mirror chamber. Here, they are placed on a swing for nine days which rocks slowly.

Avanimoolam Festival
The festival takes place in August/September. It is basically organized to celebrate the coronation of Lord Sundareswarer. Priests narrate mythological stories of Siva through a play called 'Lila'. It includes the recitation of 64 miracles of Siva, which saved the city from adversity. The venue of the celebrations is the Sundareswarer Temple.

Float Festival
Float Festival is one of the main festivals celebrated in Madurai. It takes place on the full moon night of the Tamil month, Thai, which falls between mid January and mid February. The concept of the festival dates back to the 17th century, when it was celebrated for the first time by King Thirumalai Nayak.

Dance Festival
This cultural festival is organized by the Tamil Nadu Tourism Department. Dancers from all over the nation participate in this fifteen-day festival. Various dance forms are presented by the participants.