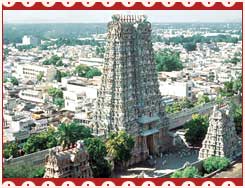 Meenakshi Temple is the most exquisite example of the Dravidian architecture. It is a master piece and was the center of activity for the promotion of art and culture in Madurai. It is the main attraction of the city and pilgrims come to the place in the search of spirituality and peace. The temple is dedicated to Goddess Meenakshi and Lord Sundareswarer. Meenakshi Amman Temple is located centrally in Madurai and the lotus-shaped city surrounds it completely. It claims the distinction of being the largest and the oldest temple in Madurai.

Meenakshi temple was originally built by Kulasekarer Pandya. But the credit for the present look of the temple goes to the Nayakas, who ruled Madurai from 16th to 18th century. The temple has huge Gopurams which can be seen from a far off distance. There are total twelve gopurams, but the tallest four stand on the outer walls, each facing one direction. Amongst the four gateways, the south one is the tallest. It is about 50 m high and can be climbed to have a view of the entire city.

This gateway contains the twin temples of Goddess Meenakshi and Lord Sundareswarer. These temples are again separately surrounded by four smaller gopurams. Meenakshi Amman Temple can be entered from any of its five entrances. The eastern entrance is usually preferred, as it opens in front of the Meenakshi Sannadhi (shrine), the reigning deity of the twin-temple. This is the only entrance which does not have a towering gopuram.

Ashta Shakti Mandapam (mandapam hall) is the first attraction on this side of the temple. It was built by Thirumalai Nayakar's wives. This hall was once used to distribute food to the devotees who came from far off places. The pillars in the hall are carved with Lord Siva's Tiruvilayadals (miracles) and the life story of Meenakshi, as the princess of Madurai. There are a number of other halls and towers in the temple which are worth watching for their sculptures, carvings and designs. Each one is different from the other, in one aspect or the other.

The 'Mandapam' of the temple consists of 985 pillars. Each pillar is unique. Some of the pillars are music pillars, which produce music when tapped. The special feature of these pillars is that they are carved out of a single granite stone block. The temple also has an art museum. It contains icons, drawings and photographs which date back to the 1200 - year - old history of Indian temple architecture in the south. A lot of information can be extracted on the Hindu pantheon and related legends from this splendid museum.

Various kings renovated the temple, leaving a distinct impression of their artistic taste. A number of complex corridors, magnificent sculptures and a heavenly abode suitable for Goddess Meenakshi, include the additions to the temple that were done by different kings. Her image is said to be carved out of a single emerald. According to mythology, the marriage of Meenakshi and Shiva actually took place in Madurai. It is still celebrated every year with great pomp and show.