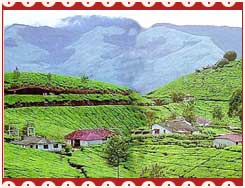 Located at a distance of 122 km from Madurai, Palani Hills are of great religious importance for Hindus. The major attraction of the hills is a temple, dedicated to Lord Subramanya. The temple is situated on top of a hill, reached by a flight of 659 steps. It is one of the six abodes of Lord Muruga and devotees from across the country visit the place in huge numbers. There is an interesting legend about how the place came to be called as Palani. The story revolves around Narada Muni, a sage who visited the court of Lord Shiva and Parvati.

He brought a golden mango, known as Jnanapalam, along with him and gave the miraculous fruit to them. Lord Shiva announced that whoever amongst Lord Murugan and Lord Vinayakar completes a round of the earth first, will get the fruit. Lord Murugan immediately took for the journey on his peacock whereas Lord Vinayakar denoted his parents as the world and took a round around them. This is how Lord Vinayakar got the fruit. Murugan felt cheated, left his home and became a recluse.

He traveled to Palani Hills in anger, and then Lord Shiva called him as Pazham Nee i.e. the fruit itself. This is how the place came to be known as Palani. The deity of Lord Subramanya Temple is in the form of a sage, standing with a stick in his hand and is called Dandayudhapani. The statue was made by Muni Bhoga, by mixing Nine Poisons called Navapashanam in a specific proportion. The idol thus contains miraculous powers.

The abhishekam water and the sandal paste is said to cure diseases like asthma and leucoderma. Anything which comes in contact with the idol is said to be charged with divinity. Therefore, people flock to the temple to realize their dreams and to satisfy their desires. Devotees from all over the nation visit the temple with Kavadi, to please the Lord and to be blessed. A number of rare herbs of medicinal value also grow on the slopes of the Palani hills.

Owing to the divine powers of the idol, Palani is considered to be the most important place of worship of Lord Subramanya. The temple is one of the richest temples in South India. Huge contributions are made by the devotees in the Hundi. There are a number of other temples in the vicinity to be visited. The most striking feature of the temple is that the deity is also worshipped by the Muslims. It is because of the direction towards which the deity looks. So, one can say that the temple is a perfect example of unity in diversity.